FOR FUN OR PROFIT, LEARN HOW TO MAKE ECOLOGICAL SIMPLE SHOES AND SANDALS 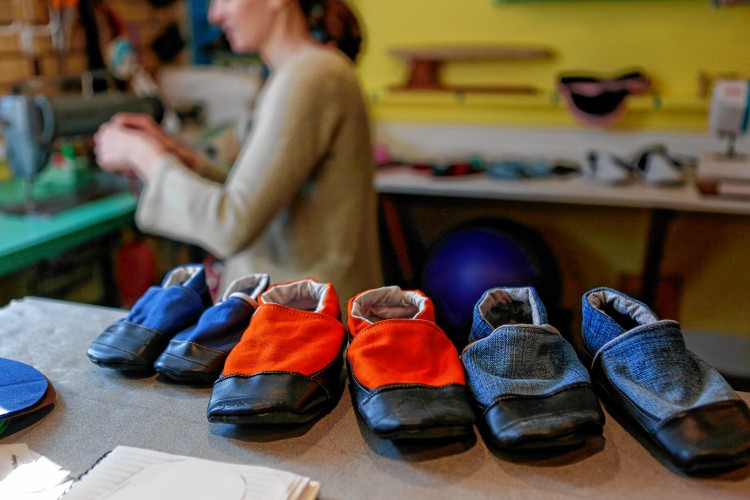 Imagine my surprise at reading the following article in the local Amherst Bulletin! It describes a woman who lives not ten miles from me who is making shoes for refugee children – exactly what I would love to be doing. We got together a few days ago, and I brought some of her patterns home so I can cut out pieces for her “muck” shoes. Muck shoes have thin rubber soles, and the rubber continues up the side of the shoes so children can wear them to play in muddy situations.

Since my children’s shoes can be made without machinery, I think there will be a place for them in this project as well  – hands being much more available in a refugee camp than stitching machines. Of course holes need to be punched to assemble my shoes, but as Andrea said to me, “If they have a nail and a rock to pound it with, they can make the stitching holes!”

I have been wondering why there were no mountain bike tire inner tubes available at local bike shops, that I use for soles for my all-recycled kit shoes, and now I know why – she is using the same material for soles on her shoes!

A step up: Belchertown business owner forgoes a month off to make ‘muck shoes’ for Syrian refugees

BELCHERTOWN — Taped to the wall behind Andrea Boyko’s industrial Singer sewing machine is a picture of a refugee child without shoes.

The picture is one not unlike the countless others seen across television and computer screens, newspapers and magazines around the country as the Syrian refugee crisis continues.

“It’s easy to look away when there is a crisis that seems so big that there is nothing that you can to do help. This crisis in Syria, there is nothing I can do to stop it or help all these people leaving their homes,” Boyko said. “There is one small thing that I knew how to do, which is make shoes, so that’s what I’m doing.”

Since 2011, millions of Syrians have fled the country’s civil war hoping to find safety and new homes. Others have evacuated from major cities after their homes were destroyed but have been unable to get out of the country.

Sitting in her basement workshop in her family’s Belchertown home the morning of Jan. 13, Boyko reflected on her decision to forego some well-earned rest so she could make shoes for the refugees in need.

“The families who are in these camps had to leave their homes,” Boyko said. “They didn’t have much time. They have just what they can carry on their backs. Kids grow, they grow out of their shoes, there are not as many resources as there should to be help them. This is just one small way I thought that I could help the kids there.”

Following the holiday order rush, Boyko normally takes the month of January off from her business.

This year, though, she is spending the time making her “muck shoes” for children halfway around the globe.

With an experienced hand at the scissors, Boyko said it takes about 15 minutes for her shop worker to cut the shoe materials. At the sewing machine, it takes Boyko about another 15 minutes to sew it all together.

To make the shoes, Boyko uses repurposed rubber from inner tubes from bike tires as the outer soles and a mixture of recycled and new fabrics and textiles.

Old shirts and sweaters in a rainbow of colors fill the shelves in the small workshop. The industrial sewing machine came into Boyko’s possession after the passing of a Springfield tailor who used the machine for decades.

Moisture-wicking wool serves as the sole liner for the shoes and T-shirts are transformed into a soft inner lining. On the outside, durable fabric from old sweaters and jeans or new water-resistant duck cloth form the outside.

“They should work well in the camps. If they get muddy, you just rinse them off and they dry really quick,” Boyko said.

“Because of the elastic, they stay on the feet even if they are all little big so they can wear them a lot longer than typical shoes,” she said.

Boyko has pledged 50 pairs of children’s shoes but is going to make as many as she can. Already she is nearing her goal.

In June, instead of the planned family vacation to Costa Rica, the Boykos will head to Greek island of Lesbos.

“I feel like the world has pulled us in another direction,” Boyko said.

The island, once a popular tourist destination, has become home to thousands of refugees who traveled by raft from Syria, Afghanistan and Iraq. According to the International Rescue Committee, over 1 million people have traveled through Greece since 2015.

The plan is to spend an entire month in Greece.

“I have a feeling once I’m there, I’m not going to want to leave,” Boyko said.

While in Greece, Boyko said she will run sewing workshops in the refugee camps. In addition to teaching basic sewing skills, she’ll also share here secrets on how the shoes are made.

The benefits, she said, will be twofold — the sewing will give the refugees something to do during the day as well as give them a life skill that may be used to earn an income one day.

A second batch of shoes will go along with Boyko to Greece in June.

He said work like hers and that of the committee are part of larger effort that is making a statement to the Syrian people that there are people in America who care very deeply for their lives.

“It’s sending that larger scale message — we haven’t abandoned you and we’re really trying to help in ways that we can,” Kane said.

Having exhausted her local bike shops supply of discarded inner tubes, Boyko said people have been helping her gather more.

“I had a friend who went to Boston last weekend and went to a couple of shops (to collect inner tubes),” Boyko said.

For those interested in helping, Boyko is still looking for more bike inner tubes as well as thick wool blankets that get used as shoe inserts. The blankets can be any size or color.

She is also accepting financial donations to cover the cost of shipping a box of shoes to Turkey as well as purchasing two or three industrial sewing machines for the refugee camp.

In the case of the sewing machines, Boyko is also looking for somebody in Europe to help get the machines as they would be hard to transport to Greece. She said the closer to the camps the machines already are, the better.

Boyko can be reached through Bula Jean’s Boutique Facebook page at facebook .com/Bula-Jeans-Boutique-183782958307742/ or by email at futureleadersofghana@yahoo.com